By Amit shah on October 7, 2013 in Muscular System

It is a broad, cylindrical-shaped muscle in the forearm that normally curves around the upper third of the radius. As the name suggests, the muscle causes supination, which describes movement at an ankle, foot, or a shoulder joint. Previously, “supinator longus” referred to the brachioradialis, a muscle of the forearm, and the term “supinator radii brevis” was given to this extensive muscle. The tricep extensor is an antagonist of this muscle. It is also found in cats and dogs.

The lateral supracondylar ridge of the humerus gives rise to the superficial layer while the inner muscle fiber originates from the posterior part of the ulna. The peripheral fibers are usually inserted into the lateral edge of the radial tuberosity and the oblique line of the radius.

The posterior/extensor compartment of the forearm comprises of several muscles, supinator being one of them. 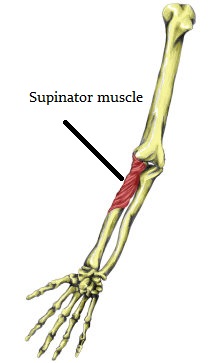 The muscle is composed of two zones of fibers, the upper portion being only a tendon. It attaches to the radial collateral ligament and radial annular ligament. The external fibers of the profound layer develop into a sling-like fasciculus that curls dorsally around the neck of the radius above the tuberosity and attaches to the rear end of its medial surface. As discussed earlier, the superior plane is introduced into the dorsal and lateral surfaces of the body of the radius between the oblique line and head of the bone. The most superior part of the muscle is called arcade of Frohsr or supinator arch.

The primary role of the muscle is to supinate the upper arm, meaning turning the hand in such a position so that the palm points in the upward direction. In this way, the biceps brachii, simply called biceps, is able to perform movements. This is, however, possible due to its ability to rotate the radius. Coordination of these two groups of muscle aids in the rotation of the forearm and flexing of the elbow. In case there is some form of resistance, the muscle in the forearm actively undertakes the heavy load.

The deep branch of the radial nerve carries a high risk of entrapment and compression since it follows a narrow course between the two layers of the muscle. This may result in supinator entrapment syndrome or radial tunnel syndrome. It is most often confused with compression of the C8 nerve root in the neck. Impingement of the nerve is most likely due to repetitive movement or injury. This condition is most detrimental to the extensor muscles and abductor pollicis longus served by the nerve as these are prone to selective paralysis. Sufferers undergo severe pain in the forearm. Palpation on the dorsal surface of the proximal forearm as a part of manual muscle testing can help in locating the problem. An electromyography (EMG) test is an appropriate procedure for recording and evaluating the electrical activity produced by the damaged muscle. Administration of painkillers and corticosteroid injections are some of the curative options for reducing the discomfort. The inflamed nerve can also be decompressed with the help of surgery. Tennis elbow rehab exercises can add immense strength to the forearm muscle. Nevertheless, overstretching of the muscle may lead to the formation of knots, causing intense pain. Focus massage on the trigger points may help in releasing these small knots. The arcade of Frohse is the most preferred site for muscle hypertrophy and lesions. Sudden degeneration of the muscle can result in atrophy. Some individuals may develop edema in the posterior aspect of the muscle, which is clearly visible on an MRI scan. Vigorous workouts can often strain the muscle and tear it. This is most commonly observed in the middle age population. 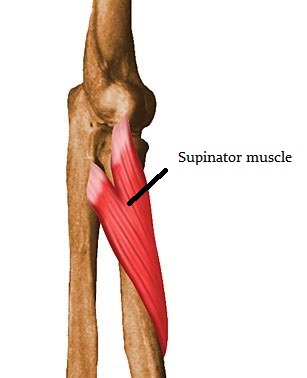