By Anirudh Agarwal on January 10, 2014 in Lymphatic System

It is a vital glandular organ that helps in the development of the body’s immune system by secreting hormones called humoral factors. It is mainly composed of lymphatic tissues and remains highly active during infancy and pre-adolescent years. Similarly, the spleen is composed of numerous efferent lymphatic vessels that filters out old red blood cells and fights infections.

It is roughly located in the upper chest, behind the sternum (breastbone) and in front of the heart. This ductless, gland-like body is most prominent at puberty.

The growth of the lymphatic gland normally takes place through the following two stages:

Lymphoid thymocytes and thymic epithelial cells are the prime elements of the gland having a different etymology. Under normal circumstances, the thymic epithelium appears as two flask-shaped endodermal diverticula, arising from the 3rd pharyngeal pouch only to join with the surrounding mesoderm and neural crest-derived mesenchyme in the aorta. These glandular components merge and join with connective tissue. As time passes, the pharyngeal opening of each diverticulum becomes indistinct. In some cases, the proliferation of the epithelial cells may lead to the development of the fourth branchial pouches.

Post-puberty the gland begins to shrink, triggered by the elevated amount of sex hormones in the body. This process is a conserved sequence, usually denoted as “thymic atrophy”. The consequent reduction in epithelial cell number leads to decrease in the size of the organ. Regression of the gland is often related to hair loss in adults. However, in some cases, renewal of immune competence after stress, or infection is possible due to endogenous thymic regeneration.

At birth, this soft, pinkish mass of tissue is gigantic, measuring 5 cm in length, 4 cm in breadth, and 6 mm in thickness. It can also be seen in most fetal ultrasound findings. The shadow of the gland is often visible as a triangular sail on a chest X-ray of children. This is popularly known as “sail sign of the chest”. At the time of puberty, it has a maximum weight of 37g. However, the organ undergoes atrophy in response to puberty as mentioned earlier. It comprises of two lateral lobes and is anatomically situated in the thorax as well as in the neck. Several lobules are present in each lobe of the gland, cemented by areolar tissue when seen under a microscope. The lobules are in turn made up of numerous follicles or tiny nodules. Each of these sacs comprises of the following parts:

The main function of this endocrine gland is to produce and process lymphocytes (a type of white blood cell) or T cells. The thyroid gland, however, plays a major role in modulating thymic endocrine activity. Normally, hematopoietic progenitor cells, thymocytes, produced in the two lateral lobes, develop into T-cells. Later, these mature T-lymphocytes leave the gland and form peripheral T-cell repertoire. B-cell precursors are also present in the lymphatic organ. T-cells have the ability to identify and attack foreign bodies with the aid of its receptor. During thymocyte maturation, these T cell receptors go through a genetic reconfiguration in order to bind with each T-cell. Autoreactive T- cell receptors being non-functional are completely eliminated from the organ through a process called negative selection. On the other hand, the functional T-cell receptors migrate to the medulla for maturation with the aid of positive selection. Activation-regulated chemokines, produced by dendritic cells, endothelial cells, keratinocytes, and fibroblasts, are expressed in the gland in order to interact with the chemokine receptor CCR4. Exchange of substances between the circulatory system and thymus is regulated by the blood-thymus barrier. The barrier is highly essential in preventing the developing thymic lymphocytes from being exposed to the T-dependent antigens. As a part of a research, some medical experts have discovered thymus-independent antigens that produce normal antibody responses in athymic mice. Thumping or tapping on the chest 10 to 12 times is one of the most important yoga postures to boost the immune system.

An impaired gland can severely affect the immune system and make the body more vulnerable to a host of disorders. Some of these include:

Besides these auto-immune and allergic disorders, the vital organ can develop cancer, which appears in the form of a tumor or cyst. Thymomas and lymphomas are the two primary types of tumors that commonly result in thymus hyperplasia/enlarged thymus. Inflammation of the gland can cause extreme pain and discomfort. Some of the other symptoms of the disorders include a cough, shortness of breath, fever and weight loss. Doctors can detect these lumps with the aid of imaging tests and biopsies. Affected patients generally have abnormal residual thymic tissue due to excessive growth of the gland. Such medical problems are generally resolved through thymectomy, the surgical removal of a diseased/swollen gland. In some cases, patients may have to undergo transplantation. Yellow fever vaccines are generally prohibited in patients with an underactive gland.

The immune system of several jawed vertebrates such as Hagfish, larval lampreys and tunicates are regulated by this ductless organ. Researchers have also found the gland in cats, goats, calves, sheep, pigs, and chicken. In fact, calf thymus DNA extract or supplements can be used as a substrate for DNA polymerase assays as well as a potent drug in stimulating the immune system and treating skin disorders, infections, and bone marrow failure. In certain tablets and capsules like Thymus PMG, bovine thymus extracts are found as nutritional supplements. 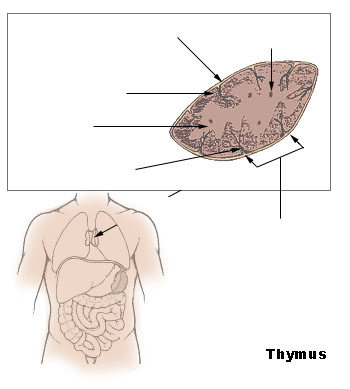 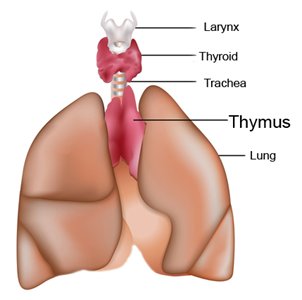