By Jaysmita Sarkar on November 7, 2012 in Female Reproductive System

It is the natural margin which marks the meeting point of the chest and the breast. It is abbreviated as IMF.

It is partly responsible for endowing shape and form to the female breasts. This anatomical feature is significant from the cosmetic perspective, as it is considered during breast enhancement surgeries.

According to studies, the tissues and cells of this structure are composed of a series of collagen, tightened by a superficial fascial system. This natural dermal constitution is developed by the union of the mammary and superficial fascia.

Incision of IMF is a common technique adapted for achieving breast enhancements. The fold below the breast is chosen to make the incision. The implant is put in through this. For increasing breast size, a surgeon aims at making a new fold to position the nipple correctly. This demands precision and proficiency of the surgeon.

The reconstruction of IMF is difficult while performing breast reconstructions. And yet, it is the essential aspect for enhancing the beauty of the breasts during such surgical procedures. The distance Nipple to IMF should usually be greater to achieve a successful reconstruction (sans the risk of developing double bubble). Some cosmetologists believe that this poses no threat if done following the correct procedure.

Some of the images listed here may help you get a clearer idea about the visual appearance of an IMF. 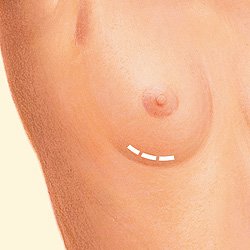