By Shoummojit Roy on March 22, 2012 in Digestive System

Intestinal villus refers to any one of the small, finger-shaped outgrowths of the epithelial lining of the wall of the intestine. A cluster of these projections is referred to as Intestinal villi.

Each of these protuberances ranges from 0.5-1.6 mm in length and extends about 1 mm into the lumen, which is an empty cavity or tubular passage of the intestine.

These projections are tubular and thread-like in form. These are tiny and have a very complex structure. Each villus comprises of a lymphatic vessel and a capillary bed. The outer surface of the villi is topped with layers of cells.

The type of cells covering the surface of this protuberance involves:

The surface of the first type of cells is covered with minute hairlike structures known as microvilli. These tiny structures allow absorption of nutrients by the cells. The cells that act as a cover for the villi survive for only a few days. The dead cells are cast off into the lumen. Following this, they are digested and absorbed into the system.

The villi of the intestines act as the spots where essential fluids and nutrients are absorbed into the body. The Villi helps the absorption of nutrients by increasing the surface area of the small intestine. In this way, these intestinal structures play a vital role in proper digestion. The nutrients that move through some cells in this layer are absorbed by the lymphatic vessels and the capillary network. Following this, they are transported to other areas of the body by the lymphatic system and blood. 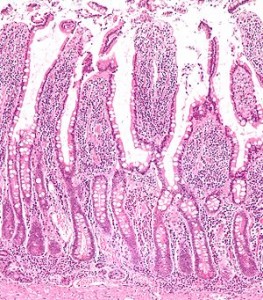 Villi are naturally designed to facilitate absorption of nutrients in the small intestine. Each of these projections consists of a thin wall that is only as thick as a single cell. It allows a diffusion path that is shorter in length.

Villi have a large surface area. This helps them facilitate a more efficient absorption of glycerol and fatty acids into the bloodstream. These protuberances also help the intestines to transport food along the digestive tract.

The villus is encompassed by a columnar epithelium which is pink in appearance. Enterocytes, which are involved in the digestive process, mostly make up the epithelial cells. Blue-colored goblet cells, present among the enterocytes, produce mucus which prevents self-digestion and lubricates food. The lamina propria, inside the columnar epithelium, comprises of lymph vessels and the venous and arterial blood supply. Digested products are absorbed into the blood. The enterocytes also contain nerves, which are yellow in appearance.

Crypts are regions between the villi that look like moats. These manufacture the cells that form a covering over the surface of the villi. Stem cells can be found at the bases of these crypts. The stem cells continue to divide and constantly produce daughter cells to substitute dying cells. Most daughter cells migrate up along the villi and divide into other kinds of cells. Some of them remain to become stem cells in future. While some turn into mature absorptive enterocyte cells, others transform into goblet cells that produce mucus. Other migrating cells turn into paneth cells, which secrete antimicrobial peptides and sterilize the inner areas of the small intestine.

Several disorders affect these threadlike projections, causing harm to the body. These include:

It is a common disorder characterized by damage to the small intestinal lining which occurs due to ingestion of gluten and other similar proteins that are present in rye, oats, wheat, barley and other grains. It also arises due to an intake of protein that can be found in hybrid grains like Triticale. The condition may destroy the Intestinal villi after ingestion of products that contain gluten. It can lead to reduced absorption of fats, proteins, and sugars. The fermentation of excessive fat and undigested carbohydrates in feces can result in abnormal stools. If left untreated, people suffering from the condition may exhibit symptoms of malnutrition. These include:

Also known as Regional Enteritis, this is an inflammatory bowel condition that may affect any section of the gastrointestinal tract extending from the mouth to the anus. It may lead to various symptoms, which primarily include problems like:

It may also give rise to complications outside the gastrointestinal passage, such as:

Biopsies conducted for this condition may exhibit blunting of the Intestinal villi, which indicate chronic mucosal damage.

Check these Intestinal Villus pictures to know how this tiny structure appears under the microscope. 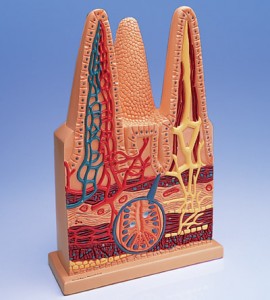 It is owing to the intestinal villi that the surface area of the small intestine is quite larger than it should be. The villi take up approximately 200 square meters (656 square feet) — which is 100 times larger than the surface area of the skin of an average individual. In the absence of the intestinal villi, the human body would not have been able to absorb essential nutrients. Thus, it plays an important role in the human body.