By Anirudh Agarwal on July 29, 2017 in Skeletal System

The human skull is made up of many bones held together by fibrous joints called sutures. The inferior surface houses a number of processes for strong attachment of various structures of the face and neck region. The mastoid process, lying in the mastoid part of the temporal bone in the human skull, is a conical/pyramidal projection present each side of the head, at the base of the skull. It is the prominent bony protrusion easily seen behind the earlobes.

The mastoid process is located behind the external auditory meatus, lying lateral to the styloid process, at the vertebral level of C1. 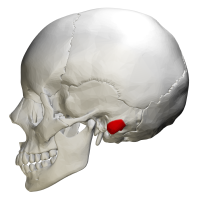 The mastoid process is a pair of conical bones projecting downwards, arising from the posterior ends of the parietal bones of the skull. The parietal bones are a pair of bones present on each of the lateral walls of the skull, encompassing the middle and the inner ear. The posterior border shows articulation with the occipital bone, while the anterior border is merged indistinctly to the descending portion of the visually flat section of the temporal bone. The petrosquamous suture can be seen running vertically above the process. 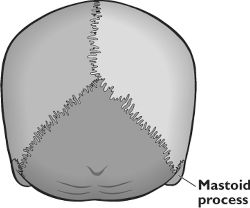 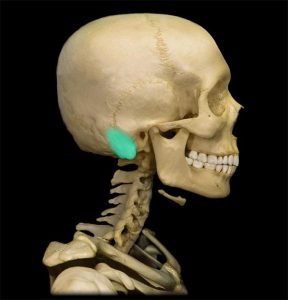 Medical Ailments With Respect To The Mastoid Process

It is referred to as inflammation and infection of the mastoid bone. In infants, it can be a prominent cause of mortality as it is hard for the medication to reach the target.

1. Causes -The main cause of mastoiditis is otitis media. The Lenoir cells gain infection as they are in close contact with the middle ear.

If left untreated, Mastoiditis may lead to permanent hearing loss, meningitis, brain abscess, and lesions which can be fatal.

Infection in the parotid glands causing severe pain which aggravates during chewing causes severe pain as the sheath protecting the parotid gland limits the swelling of the gland.when the mouth is opened for chewing, the swollen parotid gland moves back and irritates the facial muscles thereby compressing e mastoid process, causing pain.

It is an ear disease where a cyst starts forming below the mastoid process owing to the incomplete opening of the Eustachian tube for equalizing air pressure in the pharynx. It can lead to chronic ear infection and hearing impairment if not treated on time. Treatment includes surgical processes followed by appropriate medication to help prevent recurrence of the cyst.

The formation of malignant tumors due to abnormally growing squamous cells, the mastoid tumor is a form of skin cancer.