By Shoummojit Roy on February 3, 2012 in Integumentary System

It is the actual fingernail that is made of translucent keratin protein composed of amino acids. It is produced by a type of modified epidermis. It is also known as “Body of Nail” or “Corpus Unguis”. The plate is the actual nail. In common terminology, the word “nail” only refers to the plate.

The nail consists of three sections – 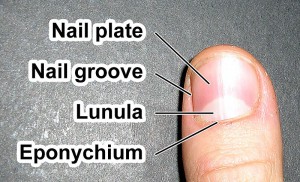 It is the nail matrix which is responsible for the production of the cells which turn into the nail plate. The thickness and size of the nail plates are determined by the thickness, size, and length of the matrix. New nail plates originate from the matrix as round and white shields and push the cells of the older nail plates forward. It is by this process that nails “grow”.  The cuticle on the plate is composed of dead cells and is typically removed during a manicure.

It is the firm, translucent section of the nail that appears pinkish in colour. This pink appearance is due to the presence of blood vessels beneath the nail. The underlying surface of the nail plate comprises grooves along the entire length of the nail. It is these grooves which help the plate anchor itself to the nail bed. The transversal shape of the plate is determined by the shape of the underlying bone.

The plate of the nail is often affected by several diseases, which include:

Tinea Unguis, also known as Onychomycosis, is a type of ringworm that affects the nails and caused by fungus. It is characterized by deformities and thickening of the nails. It ultimately leads to a loss of the plate. It can also lead to thickening, discolouration, crumbling, or chalkiness of the nails. Treatment for the infection involves administration of oral drugs which can cause severe side effects such as liver failure. Mild form the infection is usually treated with the combination of topical antifungal medication. However, for advanced stages of onychomycosis, particularly if it involves more than one fingernail, it is recommended to use systemic medication or pills.

The conditionas also called as nail atrophy, results in atrophy or wasting away of the plate thus making it lose its sheen. The body of nail gets smaller and in some cases, falls off completely. Onychatrophia can affect adults (men and women), infants and children, and toe as well as fingernails. Onychatrophia is not likely to cause discomfort or pain. This often occurs after an ailment or injury.

Some of the other causes include

Contact with chemicals or damage arising from chemicals can also cause onychatrophia.  After analyzing the root cause of the problem, a dermatologist may prescribeointments, antibiotics, or anti-fungal creams

It is often a result of trauma (injury) and is marked by thickening of the plate. Also called “ram’s-horn nail”, onychogryposis involves thickening and increase of the nail’s curvature. In this condition, the plate curves inward and compresses the nail bed.

Onychogryposis affected nail can also have many ridges and grooves, appear brownish, and grow rapidly on one side when compared to the other side.

Onychogryposis could be congenital and can also result from long-term neglect. Usually affects great toe but the condition may also be seen in other toe and fingernails. With thickly curved nail posing difficulty to cut, it can remain untrimmed and thereby increase the problem.

In some cases, a surgical intervention is required to resolve this problem.

It leads to brittle nails that often split lengthwise. These also peel or develop vertical ridges. The disorder can arise as a result of heredity or handling of strong solvents. It can also occur after oral retinoid therapy or because of anorexia nervosa, hypothyroidism, bulimia, or anaemia. Such nails have to be rehydrated with oil or paraffin to restore normalcy to them.

Paronychia is a bacterial nail infection that is caused by Staphylococcus aureus (S. aureus). The infection usually involves nail fold and the nail plate and occurs along the edges of the toenail or fingernail, prevalent more commonly as a hand infection. Based on the appearance and location of the infection, it can be easily distinguished from other infections like herpetic whitlow and onychomycosis if neglected for a long time and can lead to severe infections affecting the entire toe or finger.

In case of acute paronychias, treatment methodology includes the use of oral antibiotics, warm-water soaks, and surgical drainage. In chronic paronychia, patients are advised to avoid any possible irritants or triggers, and use topical antifungal medications and steroids, or go for surgical intervention.

Nail plate abnormalities often result due to such inflammatory conditions that affect the nail bed or matrix. Physicians and dermatologists can diagnose these disorders with the unique physical characteristics that they give rise to. Plates of nails are commonly impacted by microbial infections, trauma, skin disorders and also advancing age. With advancing age, the protein level undergoes a change which makes the nails brittle and susceptible to splitting.

Practising good personal hygiene and taking proper care of hands and feet can help lower the risk of most problems affecting nail plates.

Check out these useful pictures of Nail Plate to know more about it. 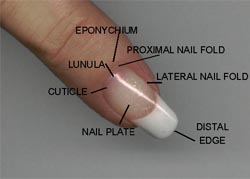 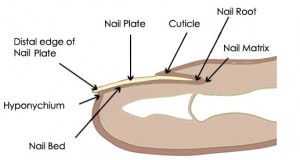