By Anirudh Agarwal on September 29, 2017 in Nervous System

One of the most significant nerves that have a control over most of the movements related to the eye, which includes the constriction of the pupil, is the Oculomotor nerve. It is also responsible for keeping the eyelids open by innervating the muscles of the levator palpebrae superiors.

In terms of hierarchy, it is preceded by the olfactory and the optic nerve. The oculomotor nerve begins from the third nerve core (found ventral to the cerebral aqueduct on the central grey matter) of the superior colliculus. This motor nerve consists of two separate components, each of which has a distinct role to play. The names of the components are – somatic motor component and visceral motor component. 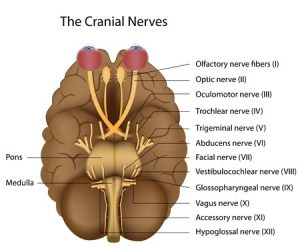 This nerve incorporates axons of sort GSE, physical efferent and innervates skeletal muscle of the superior, inferior, medial and inferior oblique muscles. It innervates all the external muscles except the lateral rectus and the superior oblique.

This specific motor component has the function of providing four extraocular muscles in the eye along with the motor fibers to the upper palpebrae superioris. It has an effective control over the muscles that permits the visual tracking and fixation done by the eye. While visual tracking is related to motion, fixation refers to the focus on a non-moving object. For instance – a tractor moving constantly on the field is visual tracking and a swallow sitting on a platform is a fixation.

When it comes to this particular component, it takes part in dominating over some involuntary actions of the ciliary muscles and also the constrictor papillae. Besides it also has a significant function in helping in accommodation and pupillary light reflexes. Accommodation can be described as the feature that is the ability of the eye to keep an object’s focus intact even when it distances from the eye. Again, pupillary eye reflexes are the automatic alterations in the size of the pupil. Thereby, it keeps a check on the amount and intensity of the light entering into the eye and makes sure that it isn’t too glaring for the eye to bear.

This nerve has the capability of controlling the pupil. It is the third of 12 cranial nerves which is in the brain and can also control the movement of the eyelid and eyeball. 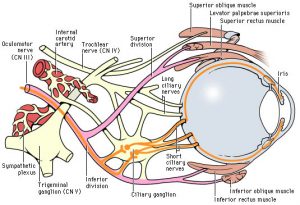 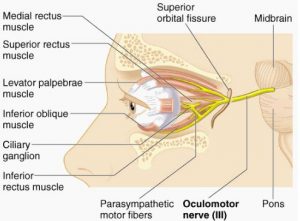 Discussed below are some of the various symptoms which direct towards the eye getting affected by the dangers of palsy.

Possible causes behind it

There are multiple and varied reasons behind the sudden occurrence of such a major disorder which can be broadly categorized into two – Congenital oculomotor palsy and acquired oculomotor palsy.

The doctor has not yet found any certain list of reasons that can cause this specific type of palsy. However, to start with there can be observations of any previous medical history of any other family member in the family tree or direct genetic link. At times, it can even occur as a consequence of severe trauma during birth or cases from aplasia or hypoplasia of either one or more muscles supplied by this oculomotor nerve.

Under this category there is a list of causes which have been elaborated below:

Sometimes when under great stress, the nerve does not receive enough blood and hence chokes. It goes between the prevalent cerebellar corridor beneath and the back cerebral vein above and gets its blood supply from the proximal back cerebral artery and the main cerebellar artery.

Diagnosis of the disorder

Oculomotor palsy is one of the life-threatening issues needs serious and immediate attention as soon as the symptoms are recognized. Therefore, the stages of diagnosis are as follows:

The treatment vastly varies depending on the exact cause behind the onset of the disorder. Therefore, mainly the root of the disorder is treated in order to lessen the harmful effect of the palsy on the body. Since there are no direct methods of treatment, patient waiting is the only thing to be expected from the patients. Also, they must take care to not let the causes increase in any way.

What is Oculomotor nerve palsy?

Oculomotor nerve palsy or also known as third nerve palsy is a condition when this nerve becomes paralyzed. Such a state makes it almost impossible for normal eye movements.

Who is more at risk?

People who belong to the age group of the sixties or more suffer through this because the key factors such as hypertension or diabetes mellitus victimize them.

Diplopia is a condition in which the eye cannot visualize a complete picture at once and suffers from acute problems of image separation.