It is the muscle located in the orbit, the bony skull cavity containing the eyeball, which elevates the upper eyelid – also known as the superior eyelid.

It is thin and flat in shape. It is triangular in appearance.

It is situated on the medial eye-lid on either side of the face.

Know about the origin, insertion, and innervations of this structure.

The muscle originates on the lesser sphenoid bone wing, at a position slightly higher than the optic foramen. It broadens to turn into the Levator aponeurosis.

It has its insertion on the superior tarsal plate and the skin of the upper eyelid.

This muscle, just like most others located in the orbit, is innervated by the superior division of Cranial Nerve III (oculomotor nerve). Due to this reason, the eyelid moves up as soon as you look upward.

This muscle helps elevate as well as retract (drawback) the upper eyelid. In other words, it helps in moving the eyelid.

Damage to the structure or nerves of this muscle can lead to Ptosis or drooping of the eyelid.

Get an idea about the physical appearance of this muscle with the aid of these useful images. 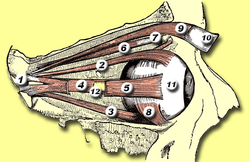 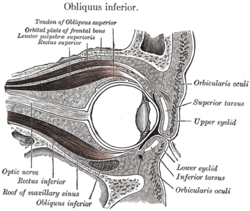