By Shoummojit Roy on November 24, 2012 in Endocrine System

It refers to a section of the anterior lobe of the master gland of the endocrine system – the pituitary gland (hypophysis), which is situated at the base of the brain.

In Latin, the structure is known as “Pars tuberalis adenohypophyseos.”

This is the largest as well as the most vascular lobe of the pituitary gland.

It is known as the major secretor section of the pituitary gland. The secretory cells of this lobe are grouped in a cord and divided by sinusoids.

It also enwraps the pituitary stalk in a sheath that is extremely vascularized.

Check out these useful images to get an idea about the physical appearance of this lobe. 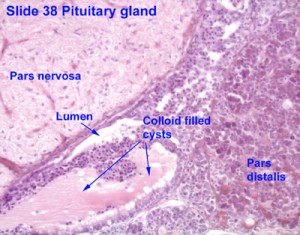