By Shoummojit Roy on September 20, 2012 in Endocrine System

What is Pars intermedia?

It is the section of the pituitary gland that is located in the brains of vertebrates. It forms a boundary between the posterior and the anterior sections of the gland.

It is also known as “Pars intermedia Adenohypophyseos” in Latin.

It is situated between the pars distalis and the neurohypophysis. It originates from the posterior wall of the Rathke’s pouch and comprises of the vestigial lumina of the pouch that looks like narrow vesicles of varying length. These may give rise to Pars intermedia cysts, also referred to as Rathke’s cleft cysts.

It is composed of a thin layer of epithelial cells. This brain section consists of cells of three types. These are:

The main function of this pituitary section is to manufacture the MSH (Melanocyte-stimulating hormone), releases the pigment Melanin into the pigment cells (melanocytes) of the skin. In other words, the hormone determines the pigment of the skin in human fetuses. In fishes and other amphibians, the hormone also affects their ability to appear darker in order to camouflage themselves.

The intermedia also act as the site of production of various other important hormones, such as:

It is another vital hormone that functions as a precursor to ACTH.

It is associated with growth and nutrition of the body.

Take a peek at these images to know how this brain structure appears to view. You would find these pictures useful in understanding the physical appearance of this brain section. 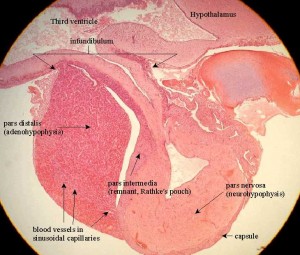 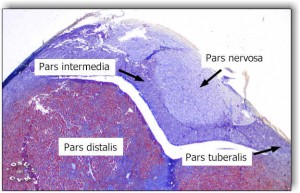