By Shoummojit Roy on September 24, 2012 in Male Reproductive System

What is Tunica vaginalis?

It refers to a mesothelium-lined serous sac that contains the testicle and sections of the body and tip of the epididymis. It is the serous membranous covering of the testis, except the posterior region.

In Latin, the structure is referred to as “Tunica vaginalis testis”.

This pouch-like structure is situated within the testicles. It descends into the scrotum immediately in front of the testicle.

In between 2nd and 3rd months of the gestation period, processus vaginalis, evagination of the parietal peritoneum, extends into the scrotal region lining the anterior portion of the developing testis and a ligamentous cord extending from labioscrotal fold to testes.

Further, in 7th and 9th months, hormonal stimulation brings about the descent of testes into scrotum from the abdominal region through processus vaginalis followed by the degeneration of gubernaculum testis and processus vaginalis.

Obliteration of the processus vaginalis causes regression of abdominal inguinal ring and upper part of testis leaving the lower region as a closed sac and thus forming a cavity of tunica vaginalis.

This serous pouch comprises of two layers of serous membranes that cover the Tunica vaginalis albuginea – a layer of the fibrous substance that enwraps the testes. It extends 1 cm into the spermatic cord. The inner surface of the sac is smooth and covered by a stratum of simple cuboidal mesothelial cells.

The pouch has two sections:

Attached to tunica albuginea, it covers the major part of the epididymis and the testis, connecting one organ to the other with the help of a distinct fold.

Adherent to the pelvic and abdominal walls it is even more than the visceral lamina. It extends upwards for some length in front and on the medial edge of the cord.

The cavity of the Tunica vaginalis is constituted by the space between the parietal and visceral laminae that is filled with fluid and aiding in decreasing the friction between the scrotum and the testes.

It is one of the various tissue layers that are involved in the scrotum structure to protect and support the scrotal contents. It protects the tip of the epididymis and the testicle.

The sac can be affected by any of the following disorders:

Incomplete or improper obliteration of the processus vaginalis can cause various congenital abnormalities. Some of the commonly occurring conditions associated with a patent or delayed closure of the processus vaginalis include premature birth, hip dysplasia, cystic fibrosis, ventriculoperitoneal shunt, Ehlers-Danlos syndrome, and peritoneal dialysis. Additionally, complete opening processusvaginalis may cause the failure of decadence of testis into the scrotum, the formation of a communicating hydrocele, or indirect inguinoscrotal hernia.T he two distorted layers of the tunica vaginalis may be detected in an ultrasound (US) as hyperechoic or isoechoic to linear bands spanning across the inguinal ring to the scrotum. Incomplete closure of processus vaginalis may lead to gliding testis, a high scrotal testis. In above conditions, testis can be found lying below inguinal ring obstructed by one or more processus vaginalisseptae from descending completely into the scrotum. A distal scrotal hydrocele could also be present. Incomplete atresia of the funicular process may result in encysted or funicular hydrocele of the ligamentous cord. In order to prevent the testicular damage, surgical orchiopexy is suggested.

Loose bodies cartilaginous externally and ossified internally can be found in serum during the presence of hydrocoele.

A hydrocele is a condition associated with accumulation of fluid in tunica vaginalis and subsequent production of a fluctuating, pyriform, and usually transparent swelling in scrotal region. Transparency, its extended and distinct fluctuation along with characteristic beginning from the lower part and extending towards the upper region are considered as a diagnostic marker of hydrocele.

Scrotal enlargement being one the most common causes, hydrocele, can also arise due to infection, tumor, trauma or be idiopathic in nature due to excessive production of fluid or non-reabsorption of fluid by the mesothelial lining.

The US presents an anechoic fluid collection around the testis. It can be treated using absorption method in young people, tapping, and surgery.

Hematocele refers to the accumulation of blood in tunica vaginalis. Characterised by swelling which is pyriform, not painful and transparent. Surgery is recommended in such cases.

Pyocele may occur due to damage and subsequent infection of the mesothelial lining of the tunica vaginalis following a surgery, trauma, or epididymo-orchitis.

Diagnosis is done by physical analysis along with a clinical history of a painful scrotal region. In a US, pyoceleis seen as septate or complex heterogeneous fluid accumulation. When organized as an abscess, pyocele is covered with a well-defined hyperemic wall. Gas bubbles occurring in the fluid collection are seen as hyperechoic foci with “dirty shadowing”.

Pyocele is usually treated with antibiotics, while a scrotal abscess with necrotizing infection of perineum requires surgical intervention.

One of the most commonly occurring opportunistic infection in human immunodeficiency viral infection, tuberculosis easily spreads from epididymis to tunica vaginalis’s visceral layer.

During the initial stages of infection inflammatory, desquamated, and bacilli cover epididymis. Posterior necrosis of tubules, caseation, and penetration of infection into interstitial tissues form a granulomatous and fibrous reaction in testis and tunica vaginalis.

At advanced stages, US depict epididymo-orchitic or vaginal nodules without flow, suggesting tuberculomas with cystic necrosis. Presence of nodules could be the only US finding of tunica vaginalis infection while epididymis and testis may be intact.

Antituberculous chemotherapy forms the initial treatment method for tuberculosis, along with the injection of Rifampicin tunica vaginalis as a proposed alternative treatment. Surgical identification of lesion is needed if there is no response to antituberculous chemotherapy as testicular tumor-like lesions are not distinguishable from testicular tumors.

Parasitic trematodes belonging to the genus Schistosoma causes a group of infections known as schistosomiasis. Of the identified 10 infecting species, Schistosomahaematobium causes a majority of the male genital infections. It primarily affects genitourinary tract, including the prostate, scrotum, and seminal vesicles.

The US reveals epididymal and testicular lesions that may simulate infarction, malignancy, or nonspecific signs of epididymo-orchitis. Infection of tunica vaginalis brings about multiple calcifications, septate collections, and an enlarged tunica with a diffuse or nodular disease.

These features are due to immune response elicited by the host to trematodes’ eggs followed by a granulomatous inflammatory reaction to egg antigens on present on the egg that is found in the tunica vaginalis. With imaging findings being nonspecific, an incisional biopsy will be required for an accurate diagnosis.

Mesothelioma is a rare type of a tumor occurring in body cavities/regions lined by mesothelial cells, like tunica vaginalis, a layer of evaginatied peritoneum. Asbestos, along with herniorrhaphy, trauma, and prolonged presence of hydrocele are considered as some of the predisposing risk factors for scrotal mesothelioma. Based on their histological features they can be grouped into various types such as benign and, mesothelial lesions like adenomatoid tumors. Characterized by gross appearance of papillary excrescences or nodules, mesotheliomas may be found in an infiltrative pattern making the identification difficult. Half of the patients show local invasion of the testis and subtunical tissue while scrotal skin, epididymis, and vascular structures are less involved. Conclusive diagnosis of mesothelioma requires surgery. In the US, hydrocele along with soft-tissue fronds of mixed echogenicity, having a hypoechoic center enclosed by a multiple extratesticular hyperechoic nodules or hyper-echoic rim originating from the tunica vaginalis is seen. A negative finding of the cytological analysis of fluid warrants US-guided fine-needle aspiration of solid masses. Being an aggressive tumor, radical orchiectomy along with surgery is recommended.

Scrotal tunica cyst is a benign form of paratesticular cyst lesions. Having a potential to become large, most of the cysts develop from the tunica albuginea in a subcapsular region and also from layers of the tunica vaginalis. Although their cause is unknown, it is usually found in the association of history of hemorrhage, infection, or trauma. Microscopic analysis of the cysts reveals a lining of nonciliated cuboidal cells, cellular debris, and serous fluid.  At US, they are found as small (2 to 5mm) anechoic unior multilocular lesions inside tunica vaginalis layers. Cysts may present low-level echoes, an uncommon indication of debris, or calcifications with acoustic shadowing.

Lipoma and leiomyoma develop from the tunica vaginalis and manifest as a painless scrotal mass. The US of lipomasis usually well-defined, hyperechoic, and homogeneous. However, sometimes a hypoechoic or heterogeneous echo-texture can also be found in the presence of myxoid, fibrous, or vascular tissue. Leiomyoma is a tumor of smooth muscle associated with interlacing of spindle-shaped muscle cells which may demonstrate myxoid degeneration. At gross sectioning, the tumor appears encapsulated and white-grey in color. The appearance of tumors varies in the US, depending on it being predominantly cystic or solid. An echo pattern of numerous narrow regions of a shadowing not cast by calcifications but correspond to transition zones between different tissue components in the mass, and a whorl-shaped echo pattern also is characteristic features of leiomyoma and may aid in differentiating it from other scrotal masses. Leiomyoma may or may not have shadowing as a result of calcifications. An absence of such findings may make leiomyoma indistinguishable from fibrous pseudotumor and adenomatoid tumor. As leiomyoma or lipoma appearances in the US are not specific, an intraoperative biopsy is needed for definitive diagnosis facilitating surgical treatment.

Sarcomas comprise malignant tumors that develop from mesenchymal cells present in Tunica, spermatic cord, or epididymis. Most of the tumors develop beneath the superficial inguinal ring and extend into a scrotal mass including paratesticular structures. Rhabdomyosarcoma is one of the most common types of sarcomas in pediatric patients, characterized by an aggressive growth pattern. A hypervascular and heterogeneous mass with invasion of the scrotum and extension into the inguinal location is seen in the US. Presence of hydrocele can also be noticed. Leiomyosarcoma and liposarcoma are the common sarcomas prevalent in adults. A solid heterogeneous mass with hypoechoic areas due to necrosis or hemorrhage can be seen during the US along with hydrocele and calcifications. Although US aids in diagnosing an extratesticular neoplasm development and analyzing the inguinal lymph nodes; it doesn’t allow for definitive characterization of a tumor. Hence, a surgical biopsy is required. Radical surgery is found to be the only effective treatment for sarcomas with the exception of rhabdomyosarcoma, which respond to chemotherapy and radiation. Lymph node involvement is also noticed in one-third of paratesticular sarcomas. In such cases, in addition to radical orchiectomy, dissection of pelvic lymph node and radiation therapy are also suggested.

Know about the physical appearance of this structure with the help of these images. 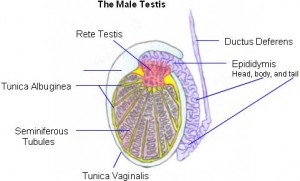 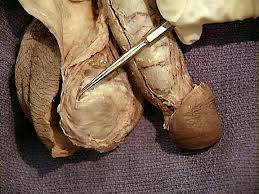