It refers to the cone-shaped third lobe of the thyroid gland, which frequently arises from the upper border of the isthmus and sometimes from the adjoining part of either lobe. Sometimes, it stretches to the hyoid bone and marks its point of stability with the thyroglossal duct. Occasionally, it is detached and is divided into two separate parts.

The structure is generally located on the left side of the thyroid gland and it measures around 10.83 mm in length and 5.50 mm in breadth. The thickness of the lobe ranges from 3-3.27 mm. In a few cases, the levator glandulae thyroideae is present and it stretches from the upper part of the pyramidal lobe to the hyoid bone.

It is the third lobe of the thyroid gland in the thyroglossal tract.

The structure can be of great significance to a thyroid surgeon before conducting a surgery. While conducting thyroidectomy for Graves’ disorder, it is mandatory to find out the location of the pyramidal lobe and remove it. This is due to the fact that the pyramidal lobe can be the actual cause of frequent hyperthyroidism leading to unfinished surgical operation of the gland. Surgeons prefer to remove the pyramidal lobe since it can be the location of growth for the thyroid cancer or can include multifocal disorder and intraglandular metastasis, especially among patients suffering from Papillary Carcinoma.

Check out these images to get an idea about the visual appearance of the lobe. 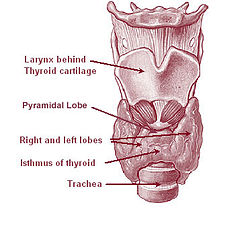 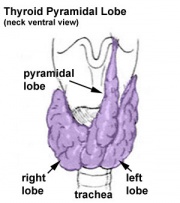