By Shoummojit Roy on January 2, 2013 in Integumentary System

It is one of the epidermal layers, composed of a layer of dead cells of the skin. In Latin, the name of this layer stands for “clear layer.” It is referred to as the granular layer of the skin.

It is situated within the epidermis. It can only be found in those regions of the body where the skin is particularly thick, such as the palms or the soles.

It can be found between the two other epidermal layers – Stratum granulosum and Stratum corneum.

It constitutes the outer epidermal layer and comprises of dead skin cells. It is responsible for the capability of the skin to stretch. It contains a protein that is responsible for the degeneration of skin cells. Being thick, this layer lowers the effects of friction in the skin – especially in susceptible regions like the soles and palms. It also makes the skin waterproof, which makes it known as the barrier layer of the skin.

Go over these useful images to know about the appearance of this epidermal layer. 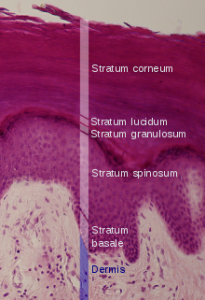