By Shoummojit Roy on July 19, 2012 in Respiratory System

It is a thin serous membrane tissue layer that sticks to the lung surface. It is the innermost of the two pleural membrane layers investing the lungs.

It is also known by the name Pulmonary pleura. In Latin, this structure is referred to as Pleura visceralis and Pleura pulmonalis.

This tissue layer comprises a smooth, continuous layer of mesothelial cells. It merges together with the parietal pleura at the root of the lungs to form a single layer. A fluid manufactured by the pleural layers is found to surround the lungs and act as a covering for the Visceral pleura.

It is moist and shiny in appearance.

It runs continuously with the parietal pleura, which is located at the lung base and covers the diaphragm as well as lines the inner chest walls. It firmly adheres to the lungs and cannot be separated from the organ.

Normally, the visceral pleura is not active enough to sense pain, touch or temperature. The sensory fibres comprising it only help in the detection of a stretch. The pulmonary plexus provides autonomic innervations to the visceral pleura. The plexus is a nerve network that arises from the vagus nerve and the sympathetic trunk. The bronchial arteries enable arterial supply that transports the blood to the parenchyma of the lungs

The main functions of this structure are:

Pneumothorax is a condition that is well-known as collapsed lung. This condition arises when air or gas fills the pleural space. It leads to the removal of the surface tension of the sever fluid in the space, thereby reducing the extension of the lung. The symptoms of the medical condition include:

It occurs due to the blunt or penetrating chest trauma, including a fracture in ribs that normally happens during road accidents or severe collisions. The traumatic condition can only be brought under control through the decompression process to ensure the removal of additional air/gas in the spaces that could help the lungs to take the original inflated position. Insertion of a chest drain can help in dealing with the traumatic pneumothorax.

This serous membrane layer is prone to conditions like:

It refers to a swelling of the pleural layers. The visceral pleura, which is the inmost of the two layers, becomes inflamed due to cold weather and certain infections. This can give rise to an acute burning pain which can be experienced while breathing deeply. Swelling and discomfort due to the condition may be relieved by steroid medications.

It occurs due to an excessive production of pleural fluid in the pleural space, the area between the two pleural membranes. It is supposed to arise due to serious conditions like Pneumonia, Pulmonary embolism, Congestive heart failure or Cancer. It impairs the ability to breathe comfortably. Pleural effusion is a serious medical disorder that requires emergency treatment.

It can also suffer from a cancerous disorder, known as Mesothelioma which owes its name to the cell layer called Mesothelium which contains the pleural layers located around the lungs. This type of cancer is commonly found to arise in people who work with asbestos.

Exposure to the molecules of asbestos silicate is believed to give rise to Mesothelioma as well as another disease known as Visceral Pleural Fibrosis. Visceral Pleural Fibrosis leads to the thickening and reduced flexibility of the Visceral pleura. Sufferers may find it difficult to breathe in as the disease worsens. Generally, the damage is found to be irreversible.

In people suffering from lung cancer, Visceral Pleural Invasion (VPI) of the cancerous lung cells indicates a poor prognosis. Patients diagnosed with this problem may require further specialized treatment for cancer. According to some oncologists, Chemotherapy might be an effective treatment option for VPI.

The space between the Visceral and the Parietal pleura is known as the pleual cavity or intrapleural space. This is filled by a serous fluid manufactured by the pleura that is known as Pleural fluid.

Take a look at some important images of Visceral pleura to know how it looks like. 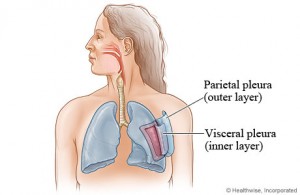 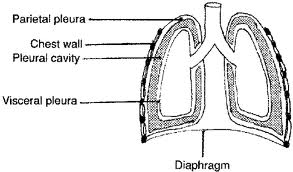