By Anirudh Agarwal on January 25, 2018 in Circulatory System

The Circle of Willis is a part of the circulatory structure in the brain. It is named after Thomas Willis, the British physician. This structure is an anastomosis which is a link or a connection between two blood vessels. The Circle of Willis forms the vascular supply to the brain and the structures that surround it. It is also known as the polygon of Willis.

Location of the Circle of Willis

The structure is a circle of arteries that are interconnected and it is located at the base of the brain. It is located near the optic chiasm, the hypothalamus, and the pituitary stalk. 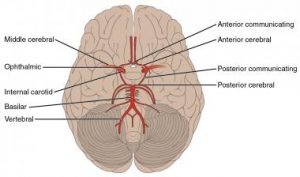 Anatomy of the Circle of Willis

It is formed by two arteries that interconnect (the internal carotid arteries) and two vertebral arteries.

They form the vascular supply to the anterior portion of the brain, especially to the structures of the cerebral hemispheres and its neighboring parts.
These arteries originate from the right and left common carotid arteries that bifurcate at the fourth cervical vertebra (4 cervical vertebrae). The internal carotid artery then goes upwards through the carotid sheath and enters the cranial cavity where it shoots out one branch – the ophthalmic artery. It then curls into the front half of the cavernous sinus and moves upwards where it divides into the middle and the anterior cerebral artery.
It also branches off into the striate arteries, the anterior choroidal artery, and the anterior and posterior communicating arteries.

Function of the Circle of Willis

The Circle of Willis is an important structure that provides the blood supply to the forebrain and the hindbrain. The network of arteries allows blood to be circulated to both hemispheres from the internal carotid arteries or the vertebral arteries. The multiple branches that arise from the circle further supply the cerebral hemispheres and the neighboring structures.
The Circle of Willis provides a safety function for the brain. If an artery on either side happens to be occluded, the Circle of Willis will allow blood to pass across the midline of the brain, allowing for collateral circulation to take place if the blood flow to one area is affected. 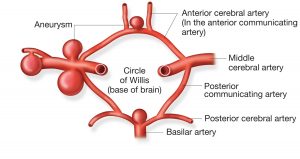 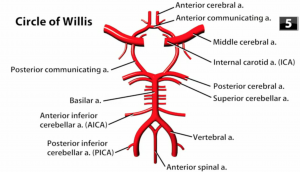 When an artery dilates more than 50% of the diameter, an aneurysm is likely to occur. An aneurysm is dangerous with the likelihood of the artery rupturing. If this happens, it requires immediate medical attention and surgery; otherwise, it proves fatal for the individual.

1. What happens if the circle is asymmetrical?

2. Does the spinal cord get affected in any way if the arteries are blocked?

Yes. Sometimes when the vascular supply of the arteries is interrupted, it affects other parts of the nervous system as well. This could result in spinal strokes or spinal infarctions. The common symptoms include muscle weakness, paralysis, loss of reflexes and loss of sensitivity.

3. How does an incomplete Circle of Willis develop?

The anatomical variations that come with an incomplete Circle of Willis can be genetically determined. Sometimes they may develop in the early embryonic stage during prenatal development of the individual which continues into postnatal development.

The Circle of Willis is a network of arteries that are found at the base of the brain and forms the connection between two blood vessels. It provides the blood supply to the mid and forebrain and also regulates the flow of blood in case an artery gets blocked.