By Shoummojit Roy on January 10, 2012 in Skeletal System

It is a channel that extends from the mandibular foramen located on the median surface of the ramus, the posterior section of the mandible which is somewhat vertical in appearance.

It is present inside the mandible that consists of:

Apart from veins and arteries, it also consists of mandibular blood vessels as well as a part of the mandibular offshoot of the trigeminal nerve. 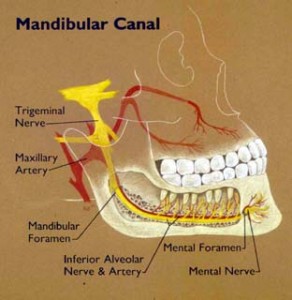 This internal canal runs transversely through the middle of the mandible and comes from posterior to anterior. It runs downward in an oblique manner and then forward in the ramus. It then moves forward horizontally inside the body, where it is located under the alveoli. It communicates with the alveoli through small apertures (openings). It runs parallel to the mandibular foramen and the mental foramen. It is the mandibular foramen that provides entry to the canal located in a posterior position to the ramus. Anteriorly, it provides an exit for the vessels and mental nerve from the canal.

Once the Mandibular canal reaches the incisor teeth, it reverts and communicates with the mental foramen. In this way, it emits a small canal called the mandibular incisive canal that runs to the cavities consisting of the incisor teeth.

This special channel carries branches of the inferior alveolar nerve, vessels, and artery that communicate with the dental alveoli through tiny passages.

In Latin, it is also known as “Canalis mandibulae”. It is referred to as “Canal mandibulaire” in French.

The word Mandibular” comes from the term “mandible” which has been derived from the Latin verb “mandere” that means “to chew”.

In 50% radiographs, the canal is found to be somewhat closely located to the vertices of the second molar. It is detected to be away from the root apices in 40% radiographs. In only 10%, the root vertices seem to get through the canal.

The canal houses vascular and neural tissue. Naturally, it is subject to pathology-related with the tissues. The channel exhibits neural malignancies as well as neural tumors, such as

Additionally, the canal is also found to be related to vascular tumors like

These types of pathology are often detected by the change in size, shape or location or course of the mandibular canal. When neural tumors are present, the mandibular canal suffers from an abnormal widening at the site of the tumor. The pathology of the canal is often diagnosed by an alteration in course, size or shape of the canal. Knowing these variations can help plan diagnostic and treatment procedures in the mandible and lead to fewer complications during treatment. 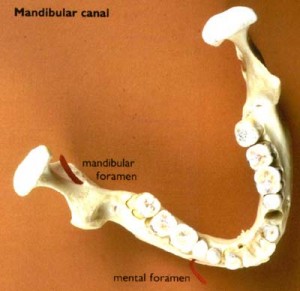 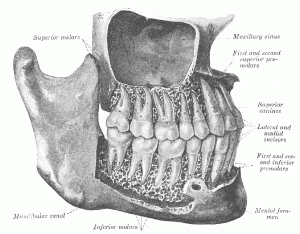 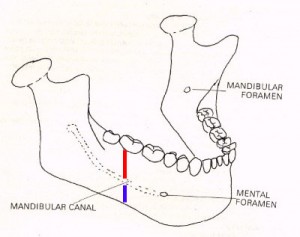